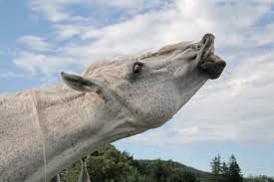 It can be a very scary thing when a horse chokes, but if you know what to do when it happens, it can make the problem resolve faster with fewer complications.  A horse chokes when grain, hay, or other substances get lodged in the esophagus and will not pass. The esophagus is a muscular tube that takes food, water, and other substances from the mouth to the stomach. Since a choke involves the esophagus and not the trachea (windpipe), the horse can still breathe, but it can cause symptoms such as nasal discharge, stretching of the neck usually in a downward direction, increased salivation, coughing, difficulty swallowing, and/or lack of appetite. Sometimes a choke can also cause aspiration pneumonia, where material passes down the trachea and into the lungs.

Choking can be caused by many things. such as dry feed, horses that eat too fast, a foreign body, and/or dental problems that would cause the horse not to chew its food properly.

If you suspect choke with a horse, the first step is to call your veterinarian and proceed with their directions. While waiting for the veterinarian, you should remove any feed that was offered to keep the blockage from becoming worse and prepare a bucket of lukewarm water. Once the veterinarian arrives, he/she will assess the severity of the choke and proceed with giving a sedative, medication to help the esophagus relax, and/or pass a tube down the esophagus. Sometimes the sedative and other medications will relax the esophagus enough to allow the blocked food to pass on its own, but in many cases, a tube needs to be passed. The veterinarian will pass the tube down the nose and follow the esophagus to the block. With water, they will gently lavage around the blockage to loosen up the material. In most cases, this will dislodge the material and the choke will be resolved. There are some situations where the blockage cannot be fixed this way and more involved procedures need to be used, such as full sedation or surgery, although this is rare.

Once the choke has resolved and if the horse has been sedated, you should not feed them until they are fully awake. You may be instructed soften the horses feed for a few days to let the esophagus heal. To prevent future chokes you should:

*If changing feeds, do it gradually

*Cut any apples, carrots or other treats into small pieces

*Slow down a horse that eats too fast by spreading out the food, placing a salt lick or large stone (one that is too big to swallow) in their feed bucket, or feed smaller meals more often

*If sedating a horse. do not give feed until they are fully awake.

As always, call us if you have questions or concerns about any aspect of your horse’s health or care.

The Story Of Broadmore
Scroll to top