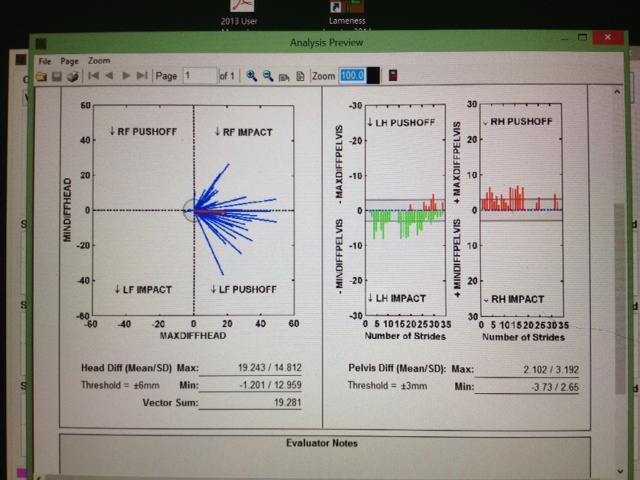 Blue Ridge Equine Clinic is excited to announce that it has recently purchased a new piece of equipment that can help us more accurately diagnose subtle lameness and performance problems.

The Lameness Locator is a handheld computer system that helps veterinarians objectively identify lameness using noninvasive inertial sensors.  Motion sensors are placed on the horse’s poll, pastern, and pelvis and are wirelessly tracked by a portable computer.  The equipment measures vertical acceleration of the 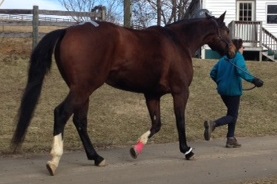 torso to determine asymmetries in head and pelvic position between left and right halves of stride.  This data is transmitted instantly to the portable computer which contains a computer program that uses algorithms to translate this data into a graphical representation of the lameness.  These algorithms were developed by years of extensive motion analysis research.  The data from the sensors can show the location (limb(s)) of asymmetry in the gait, the severity of the lameness, and at what stance in the gait the lameness appears.

The Lameness Locator sensors sample data faster than the human eye, allowing us to detect things that were previously undetectable. It is especially helpful in horses with very mild lameness or history of “poor performance” that may be difficult to see with the naked eye.  It is also helpful in horses with multiple limb lameness, and may help the veterinarian determine which lameness is the primary lameness and also at what stance in the gait the lameness appears. This may give insight as to from where in the limb the lameness is coming. The equipment makes lameness exams more accurate by providing a scientific measure of the improvement in gait following a nerve block. The Lameness Locator could potentially improve prognosis by allowing veterinarians to diagnose and initiate treatment earlier in the course of disease or injury. We are excited to offer this technology as yet another tool to help maximize performance in our sporthorses, and to help aid our diagnosis in difficult lameness cases.