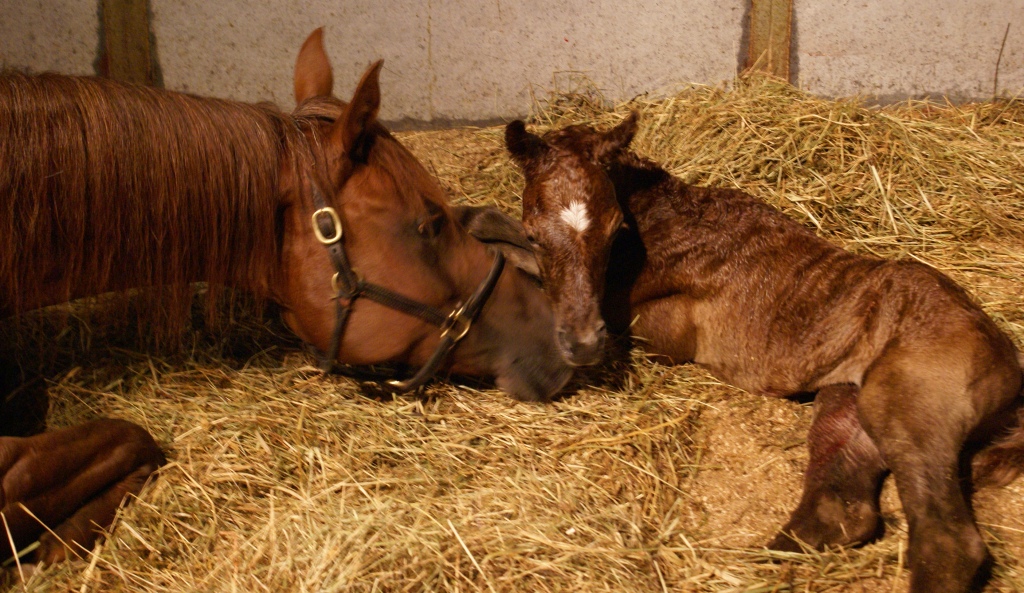 Placentitis is an infection of the mare’s placenta, usually occurring within the last 3-4 months of gestation. It can be an extremely devastating condition for the owner both emotionally and economically, as it can be a difficult condition to treat and still may end with a nonviable fetus. The earlier this condition is identified, the better the chance is of treatment working and resulting in a healthy baby.

90% of cases of placentitis result from an ascending infection through the mare’s vagina and migrating through the cervix. This bacterial contamination results in thickened fetal membranes and premature separation of the placenta from the mare’s endometrium. All of this results in decreased oxygen and nutrients to the growing fetus. Also during this process, white blood cells are responding to the infection and producing both pus and pro-inflammatory mediators which may result in abortion of the foal. Common signs of placentitis include premature udder development or lactation and sometimes vulvar discharge. In addition, often the thickened placenta can be seen on ultrasound along with separation of the membranes. Hormonal blood tests can be helpful in cases where it is unclear if placentitis is occurring.

Treatment of placentitis is multifold and includes appropriate antibiotics to treat the infection, along with medications to decrease the inflammatory response. Also, typically these mares are put on Regumate to help block the pro-inflammatory mediators and try to stop uterine contractions from occurring.   Also other drugs may be added to the regimen to help the blood flow to the foal hoping to improve viability.

If a mare delivers a foal prematurely, the fetal membranes need to be examined closely for any signs of thickening or other signs of infection. Also if placentitis is suspected, the veterinarian needs to be involved immediately as even though some of the foals can appear normal at birth, they will often decline rapidly. The sooner treatment can be instituted, the better the chance of a healthy foal.

Also if a mare does have placentitis, after foaling a culture of the uterus should be done and subsequent treatment based on the culture otherwise their ability to get pregnant and maintain a pregnancy may be hampered.

There is one other type of placentitis (not from a bacterial infection) that we see commonly in our area called fescue toxicosis which results from mares eating large amounts of endophyte infested tall fescue. The endophyte in tall fescue produces alkaloids that can affect multiple critical hormones in the mare that have effects throughout the body and can cause a number of issues including a thickened placenta, abortion, retained placenta, prolonged gestation and a lack of milk production by the mare once the foal is born. Prevention is the best treatment, so the recommendation is not to graze broodmares on fescue in the third trimester of their pregnancy. There are oral medications including domperidone that can be helpful in treating the agalactia (not producing milk) part of this form of placentitis, however again often these foals are not as healthy as normal foals due to them not absorbing as much oxygen and nutrients while in utero due to the thickened placenta, plus they are not receiving vital nutrients and antibodies (colostrum) from the mare if she is not producing milk.

If you have any questions about your broodmare’s risk for this condition or see any clinical signs described in this article, please call your veterinarian immediately.

Equine Shockwave: What Is It & What Does It Do?
Scroll to top