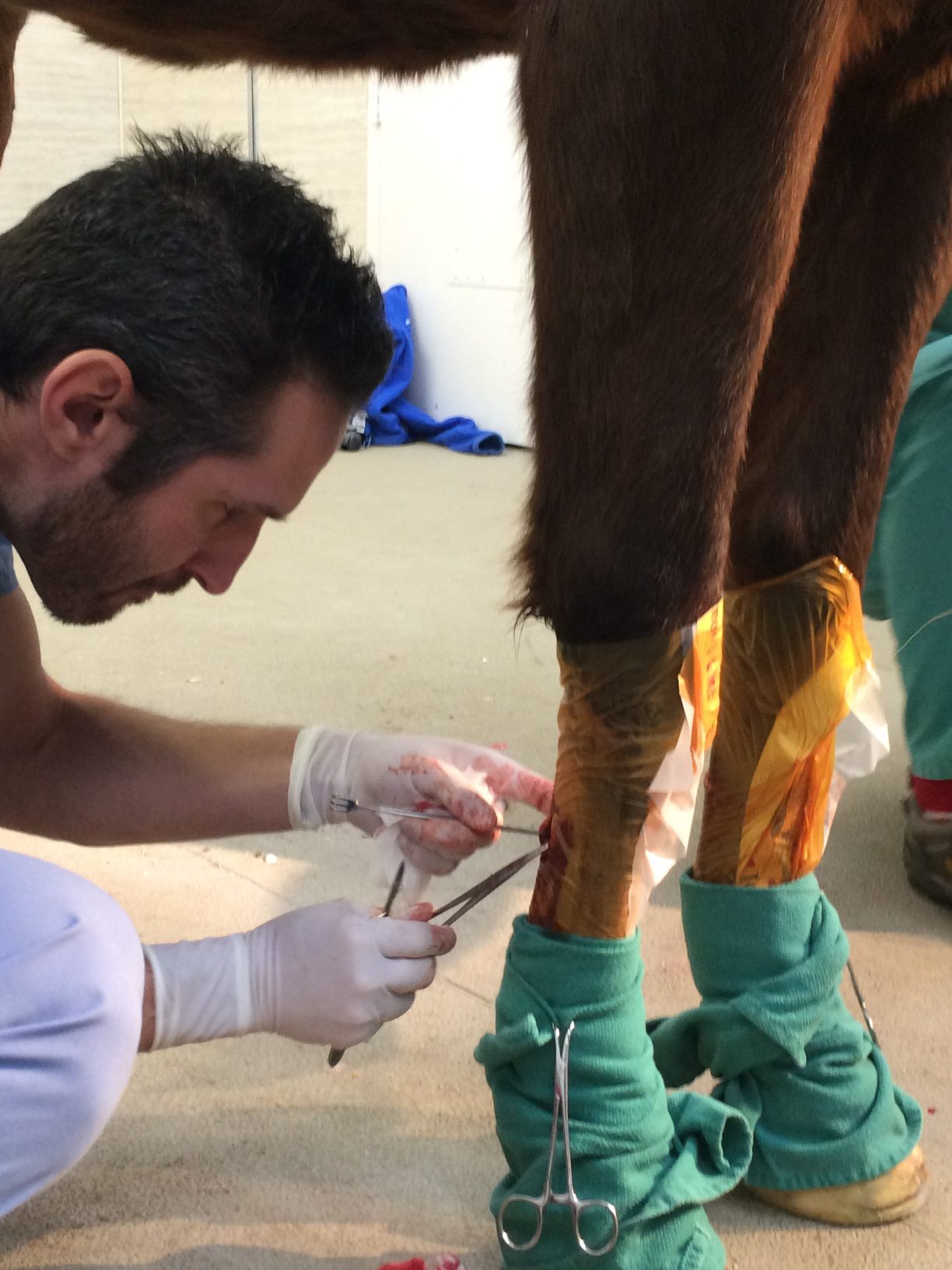 Clara Louise had been battling chronic laminitis for months, but suddenly things went from bad to worse. At 13 years old, the TB/Welsh cross mare was now so severely lame that she was reluctant to move. She had been on medical treatment for the chronic laminitis, including Prascend® to treat her Pituitary Pars Intermedia Dysfunction (PPID, also known as Equine Cushing’s Syndrome). When Dr. Reynolds Cowles examined her, her front feet were acutely painful, and radiographs showed severe rotation.

By the time Clara Louise arrived at Blue Ridge Equine Clinic, she was extremely painful and could barely walk.  Dr. Marcos Santos blocked her lower legs and feet so that farrier John Kern, with the assistance of  Marcus Wise, and Dr. Santos could work on her without causing her pain. Under the direction of Dr. Santos, the farrier carefully trimmed her feet and glued on shoes with extra support behind the foot and underneath the frog.  Dr. Santos then performed a standing tenotomy, a surgery where the deep digital flexor tendon is cut, relieving the pull on the coffin bone.

Radiographs taken at the time of surgery demonstrate how much the expert trimming and surgery helped to re-align the coffin bone in the hoof capsule. This video shows her the day after surgery, again a few days later, and on day five post surgery.

Clara Louise was maintained on anti-inflammatory medication, pain management, and medications to protect her digestive tract. She made very good progress, and soon returned to a farm near the clinic. Dr. Santos visited her regularly to change her bandages and carefully monitor her progress. This video shows her after her second shoeing cycle, post surgery. She has returned home, and is continuing to feel better all the time. Recent radiographs show that Clara Louise’s feet are now essentially normal. Her story isn’t over, but everyone on Clara Louise’s team has been thrilled and grateful for her progress; certainly not every horse or pony with severe laminitis has so happy an outcome.  Her story shows that with hard work, know-how, commitment, and some good fortune, some severely affected patients can make a recovery.

Latest update from Clara’s owners: “Look at this beautiful, happy pony!!!! Such a difference from Dec 2. I update Dr Santos weekly, will you share with John the farrier? Let him know this recent shoeing seemed to really make a major difference, I don’t know if they changed anything  but she is (fingers still crossed) doing soooooo well.”