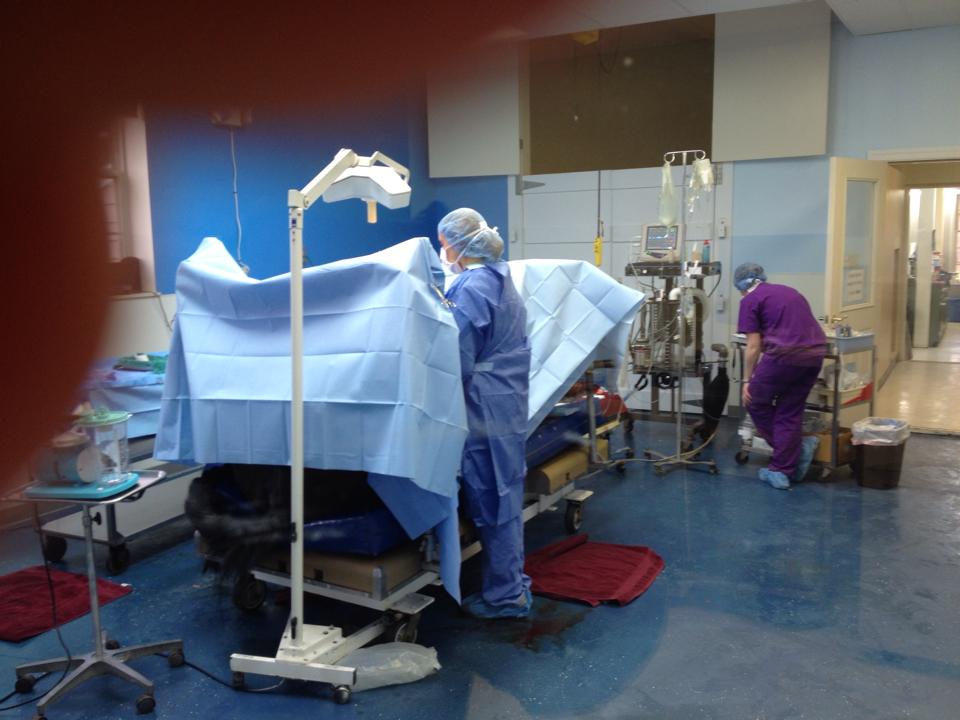 Colic emergencies in late term mares pose an exceptional challenge to veterinarians and owners, as the diagnostic information usually obtained on a rectal examination and abdominal ultrasound are extremely limited due to the large size of the fetus. Furthermore, abdominal surgery carries significant risks to the mare and foal both at the time of surgery and then at foaling. Anesthesia poses risks to both mare and foal, and the foaling puts tremendous stress on the still healing abdominal incision.

These were the concerns present when Kim Schmidt brought her mare,  O’Susannah, into the clinic on March 28 for colic. The 15y old Holsteiner mare was due on April 2 and was already starting to bag up. The mare had been treated at the farm by Keswick Equine Clinic for 36 hours but Susie continued to be persistently painful and had passed no manure. On admission to BREC, we had some concern that the mare had a colon displacement but we could not definitively rule out a simple impaction. After 48 hours of aggressive fluid therapy, there was no improvement and we felt it was time to take a look.  At surgery, a right dorsal displacement was identified. This proved a difficult one to correct due to the large fetus sitting on top of the colon, but ultimately we were successful. The mare did very well under anesthesia and recovered nicely. She was immediately comfortable after the procedure and made steady progress over the next few days. Abdominal ultrasound on April 1 revealed a normal heart rate for the fetus.  Next, it was just a question of getting through delivery. 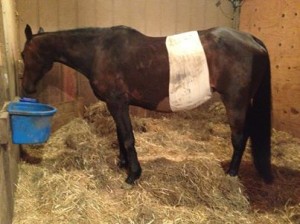 The colic and surgery seemed to set back the clock on the progress toward foaling. Susie’s bag had disappeared and when she returned to the farm on April 4, foaling did not seem imminent. This was actually a good thing as it bought more time for the healing of her abdominal incision. Soon her udder was enlarging again and our excitement, along with a tinge of anxiety, began to build. At 9 PM on April 12 (almost 2 weeks from the surgery), Susannah was in labor.   Although there were a few complications on delivery, namely mecomium in the amniotic fluid, partial early separation of placenta (red bag delivery), and an enlarged umbilical cord, Kim and her husband were able to assist the mare in a successful delivery and O’Susannah delivered a big vigorous colt and her abdominal incision was unfazed by pressure.

Both mare and foal have continued to do well and we thank Ms. Schmidt for the pictures and for allowing us to tell this story. Over the years we have had a number of colic surgeries on late term mares and, to date, all mares have recovered and had healthy foals.

Kim Schmidt, a Grand Prix Dressage rider, is the breeder, owner, trainer of O”Susannah and lives with her husband on their farm, Grayson Farm, near Scottsville, Va. where she runs a breeding, boarding, training business: https://www.graysonfarm.net

Kim adds:  O’Susannah is a home bred who has had successful careers in Eventing at the 2 star level as well as Jumpers, Fox Hunting and Dressage at the FEI Intermediare 1 level. She has also had three foals. She will return to the Dressage ring with Kim after the weaning of “Dino” registered name: “Don Dinero”. (Translated: “Mr Money”, because it took alot of money to get him here)!

All the best to Kim, Susannah and Dino!

Diane
PreviousNext
What You Need To Know About Equine Herpes Virus Myeloencephalopathy Outbrea...

Dealing With Foxtail In Your Hay
Scroll to top